I still remember when I went for an interview in ‘Infosys’ ways back to 1981, when Narayana Murthy was operating the office from his Jaynagar house in Bangalore. I did not join Infosys, since I never expected the phenomenal growth the company will have in future. 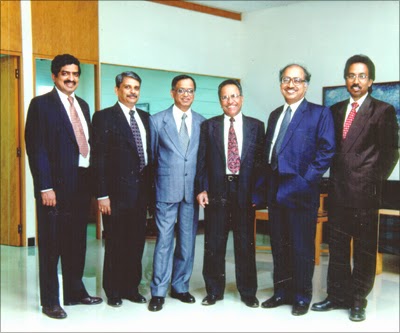 Under the stewardship of Narayana Murthy Infosys., grew by leaps and bounds and became a fag chip company in the world. A group of six software engineers emerged with the idea of a software company and in 1981  registered a company called Infosys Consultants Pvt Ltd., with borrowed money of Rs.10000 from the wife of Mr. Naryana Murthy. The six, who ventured Infosys along with Narayana Murthy are Nandan Nilekani, S Gopalakrishnan, N R Narayana Murthy, K Dinesh, N S Raghavan and S D Shibulal and Ashok Arora.

What made Infosys so unique? 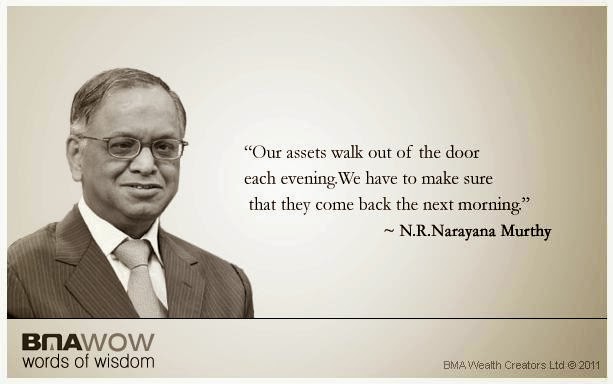 Strategy: Company’s success always depends on its strategies and plan of action. Infosys and its strategic plans made the company unique. Infosys also used zero-based decisions, where avoiding previous biases while taking strategic decisions. Infosys uses different strategies for different goals like marketing strategy, customer service strategy, business strategy and IT strategy.
Globalisation: Mr. Narayana Murthy took Infosys markets outside India and made IT products global. Mr. Narayana Murthy is a pioneer in understanding the most competitive IT industry, quality vs. cost of Indian IT professionals. He has successfully globalized Infosys. Today, over 90 percent of the Infosys clientele of  are from outside Indian shores.
Customer Service: The customer service at Infosys is friendly and delivery of the product is quality oriented. Reliability, quality and help of Infosys  product gets 90% new customers every year and repeat customers never leave him. 90 percent of Infosys clients today are not new but are repeat clients.
Human Resources: Narayana Murthy believes in quality related human resources wing and set high priority to resource hunt. According to him the skill-set of the people in a team are “mutually exclusive but collectively exhaustive”. Mr. narayana Murthy prefers producing resource team and believe in team contribution. He like to recruit creative people in order to be able to solve problems and limit outsourcing.

Narayana Murthy followed to the core all the principles he believed and followed in his personal life into his corporate governance practices.  He also shares the wealth that the company has created with the help of the employees with them again by offering shares to all his employees. In Narayana Murthy’s own words “We realized early at Infosys that if we aim for public good, it will lead to private good”. NASDAQ listed  Infosys company thus improving the image in the world market. The stock options are so attractive and employees stay in tact with Infosys. 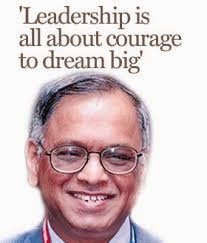 Mr. Narayana Murthy looks simple and lives simple. He had a humble beginning and continues to live humble after building an empire. He is disciplined and wanted his whole team to follow him. His strength is his employees and quality of work.  He lives in a two bedroom flat with family and never have clues left that he is the emperor of a big kingdom. I like to call him ‘Bill Gates of India’. But for his hard work, vision and confidence, Information Technology would not have spread its tentacles in the world and India would not have a name on the globe. He is different from others because he loves society and wants to give to the society by creating quality
employment.
Some facts Narayana Murthy narrated in a meeting at New York University (Stern School of Business) on May 9 about the lessons he learn from his life and career.
The first event was when he was a graduate student in Control Theory at IIT, Kanpur, in India. He heard a famous computer scientist discussing exciting new developments in the field of computer science with his students on ‘how such developments would alter our future’ with quite convincing tone. With indecisive mood he went straight to the library, read four or five papers he had suggested, and left the library
determined to study computer science.  He says that this experience taught him,  that valuable advice can sometimes come from an unexpected source, and chance events can sometimes open new doors.
Read more at:  http://www.rediff.com/money/2007/may/28bspec.htm.
References: http://www.moneycontrol.com/news/business/what-is-infosys-30-strategy_887924.html
http://www.citehr.com/118434-amazing-infosys-story-how-infosys-born.html
http://www.themanagementor.com/kuniverse/kmailers_universe/sm_kmailers/Entr_Narayana.htm
http://www.moneycontrol.com/news/business/what-is-infosys-30-strategy_887924.html

An Amazing Medical Invention by Jenner – A True Inspiration