Let Us Honor Mokshagundam Visvesvaraya – The Engineer on the Event of Engineers day, 15th September. 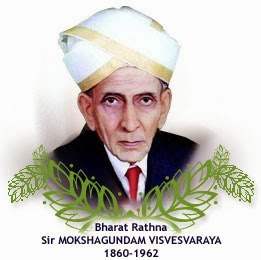 This is an  inspiration story of Mokshagundam Visvesvaraya a civil engineers during the British Empire and instrumental to Krishnaraja Sagar Dam and Brindavan Gardens in Mysore. Generally engineers are inventors and scientists are  discoverers. Engineers create new technologies and instrumental to modern world. There are wonderful constructions in the world across many countries.  The sky top buildings, amazing flyovers and water saving dams and life saving constructions are the brain children of marvellous engineers.
Visvesvaraya was normally called, MV, was born in a moderated Hindu family to Mr. and Mrs. Srinivasa Sastry and Venkachamma on 15th September 1861 in a village Muddenahalli village in the Kolar District (Karnataka). Born in a respected family he mastered Sanskrit, Indian culture and traditions from his father from the early age and did his schooling in Chikkamangalore near Kolar and came to Bangalore for higher education. After completing his engineering from Central College, Bangalore took his first appointment as assistant engineer in Public Works Department (PWD) in Bombay.
Very soon his superiors recognized his engineering excellence on civil constructions and he was
assigned most difficult tasks. MV loves challenges and his first assignment was to supply water to a village called Sukur from river Sindu. His first difficult assignment got great recognition from his colleagues.
Mr. Mv’s Block system is a mile stone in modern engineering in saving precious water for irrigation and
regulating water flow in dams through his new design of steel doors. The then european engineers in India appreciated his contribution to civil engineering. The next challenging is to tame the vicious Moosa and Isa rivers in Hyderabad. The floods in these twin rivers claimed hundreds of lives and used to wash away villages surrounding. Mokshagundam Visvesvaraya’s engineering excel once again controlled the flow of the two dangerous rivers in the form of dams. He also beautified the surrounding dams with parks and the area now is a wonderful tourist spot in Hyderabad.
Visvesvaraya is totally involved from design, start and inauguration of Krishnarajasagar dam and Brindavan gardens in Mysore. Apart from this he designed and constructed
For his public contributions and cause the British Government honored him with ‘Sir’ and Indian Government bestowed him with ‘Bharat Ratna’ the highest civic award.
There is a wonderful education and entertainment cordial in Bangalore managed by National Council of Science Museums (NCSM), Government of India and named after the veteran engineer Visvesvaraya. This Visvesvaraya Industrial & Technological Museum (VITM) is imparting knowledge of science and technology though interactive exhibits to everyone. It is more of a scientific center than a museum in its classical sense. The exhibits are divided into various scientific and electronic sections.
Dinosaur Live: Fun and entertainment to children and aged is the moving replica of a Live Dinosaur. This exhibit excites every visitor and they  stay there for a long time hearing the sound and movement of this live giant. They have a feeling of seeing the live Dinosaur movie.
This museum has a mini-planetarium show called ‘Taramandal’. This is the only museum in the world other than the Smithsonian Institutions in the US, to have a full-scale replica of the 1903 flyer of Wright brothers.
Added in the year 2007 is a new show for children -“Science for Children”. The great attraction in this
area is giant piano over which the children can dance to play music. A pin-wall helps the children to impress of their body parts on it. There is a virtual game area, where children can play music using virtual instruments. An attractive mural made of color beads welcome the visitors to this gallery, filled with fun and enjoyment. A new 3D theater using technology from Light Speed, USA is open to the public now. This theater shows Interesting films on deep-sea diving and brain function. The 3D effects are spectacular. Million visitors come to this amazing science museum every year.

What is Inspiration and Motivation? What are the Sources of Inspiration?