Writing about Srikalahasthi is a great honor to me. Srikalahasti is a spiritual abode. This holy place is called Dakshina Kasi. Kasi kshetra is a famous Hindu pilgrimage where the Lord is; ‘Kasi Visveswara’. Hindus believe that if a person dies in Kasi, there is no more births and deaths to the departed soul. The soul unites with the Lord after death in Kasi. Srikalahasti is called ‘Dhakshina Kasi Kshetra’ is on the southern side of India. Apart from spiritual importance, this temple is very ancient and one will have wonderful experiences while walking through the temple. Is above photo magnanimous? The picturesque is found everywhere in the temple. It is holy, spiritual and natural eye-feast. Srikalahasti is in south India, Chittoor district, Andhra Pradesh. It is 30 km from another holy place, Tirupati, the abode of Lord Venkateswara popularly known as Balaji and chanted by pilgrims as “Govinda, Govinda”. Srikalahasti is historically mentioned as constructed by ‘Pallava” dynasty in the 5th century and renovated by Chola kings in the 15th century. The interior carvings and the modernization is done by Sri Krishnadevaraya, the Vijayanagara and that what we visit today. Anyone can reach Srikalahasti through air landing at Renigunta, just 17 km away from Srikalahasti.

How do you step in and step out from the temple?

Now let me take around to a visual trip to Lord Shiva and Ghanaprasunamba. There are four ways to enter into the main temple from north, east, south and west. All the sides there are gopurams as shown below.

The normal way pilgrims enter the temple when they get down from the bus station or by train is the north side of the temple. Very near to this entry gopuram there a newly constructed Gali Galigopuram. The 500-year-old  gopuram was collapsed on May 26 evening hours because of cracks on the construction and a new gopuram was built. 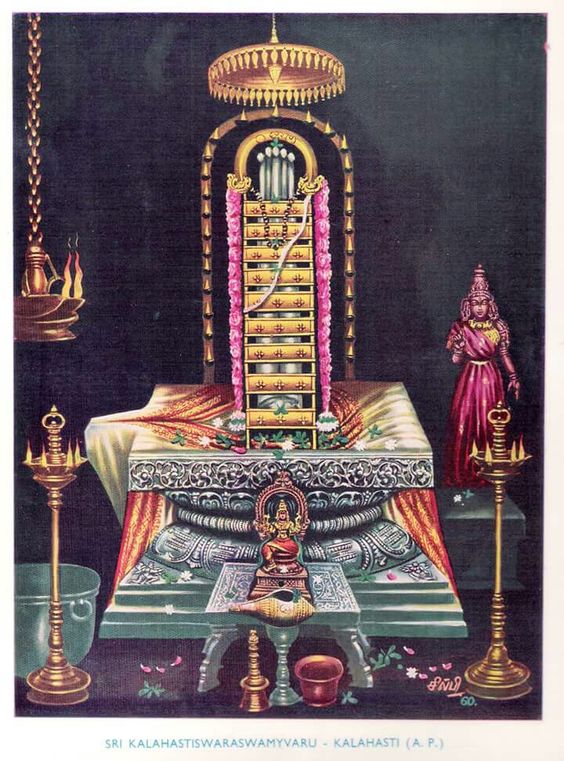 With the blessings of Lod Shiva move on to have the blessings of Ghanaprasunamba. In a hurry to see  ‘Matha Devi’ do not miss a few important deities in between. You have to have a darshan of  Lord Venkateswara, Shani Deva and many Linga swarupa’s of Lord, worshiped by Yama. Pandavas and other shidda purushas. All of them you can watch on your left side. The final Goddess on this row is ‘Bejawada Kanaka Durga’ other form of ‘Devi Matha’. 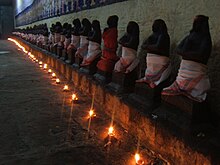 You will then take a right turn and on your left see 63 Nayanars, saints in the 6th to 8th century who were devoted to  Shiva.

Proceed now to worship ‘Ghanaprasunamba’ the Sakthi rupa of Lord Shiva. Whenever I visit the temple, I will never like to move away from the ‘Ammani’. This Ghanamba Matha statue is 6 foot long and wonderful to watch. The Goddess is decorated with ‘Bhangaru Pavada’, (Golden Sari), on Fridays. Try to worship Ghanamba on Fridays.

Do not think that your trip to the temple is over. You have to worship a few more places before coming out of the temple. You have to visit ‘Alaya Shikarlu – Swami, Ammavaru, and Kannapa’. Then offer namaskarams to Swami Chandikeswara.’. My elders said that those who visit ‘Shiva and Parvathi’ must tell to this God that you have seen Lord Shiva and Annavaru.  This deity is deaf and so you must clap your hand and whisper in his ears that you had darshan of Lord and Goddess.  Before leaving the temple, have a darshan of Dhashana Murthy, another manifestation of Lod Shiva. He is considered as ‘Pradama Guru’ the ‘first teacher’ to the universe.  Thus you complete your temple tour.

Once you come out of the temple, visit  ‘addala mandiram’ also known as the glass house, where they keep Lord and Goddess in a ‘uyyala’ and perform unjal seva. The lord will be seen everywhere through the mirrors and this sight  is magnificent. Do not forget to see ‘kali matha’ and ‘dwaja stambam’ the temple’s tall pillar. Finally, take prasadams and leave the temple.

Other places to see in Srikalahasti

Other places to see in Srikalahasti are Bhakta Kannappa hillock, Durgamba hillock, and Kumara Swamy hillock. Bhakta Kannappa in his early days was a non-believer of God. He was a jungle man, rude and illiterate. There was a Shiva temple in his village and he used to cross through the temple in search of food. One day till late evening he did not get any creature to hunt and in great hunger, he started cursing God.  The purohit of the temple convinced Kannappa that ‘if he develops the belief in God, God will show him the prey. Kannappa with all his heart pared God and he gets two rabbits in his bait. Suddenly the jungle man becomes the strong devotee of Lord Shiva. After years Lord wanted to test his devotee and while in puja, the eyes of Lord started tearing and slowly blood started coming out of the eyes. Kannappa felt very sad and offered his own eyes and Lord gave Mukti to Kannappa.