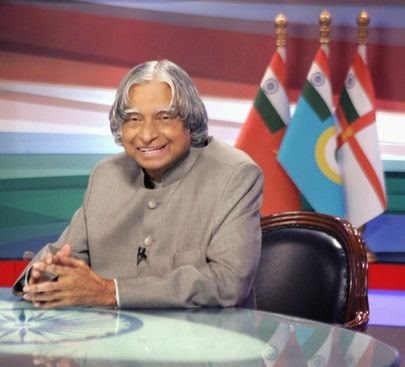 ” Thinking is progress. Non-thinking is stagnation of the individual, organization and the country. Thinking leads to action. Knowledge without action is useless and irrelevant. Knowledge with action, converts adversity into prosperity. Thinking should become your capital asset, no matter whatever ups and downs you come across in your life.”

Dr. APJ Abdul Kalam the former President of India known for his simplicity is an inspiration for many people in every walk of life. This brilliant scientist and scholar was more known for his simple and poise living than remembered as a scientist or first citizen of India. Born on Oct 15, 1931 at Dhanushkodi in Rameswaram district,Tamil Nadu to a lower middle class family and his father had to rent boats to pay kalam’s school fees. He studied at the Schwartz High School in Ramanathapuram. Dr. Kalam studied his graduation in  St. Joseph’s College in Tiruchi, and joined for Aeronautical Engineering at the Madras Institute of Technology in 1954.He then joined as scientist in  Defense Research & Development Organization (DRDO), heading a small team that developed a prototype hovercraft. But the project, never took off.He was instrumental for great launch of SLV 3 as project director in Thumba near Trivendrum.Rohini followed SLV 3 in July 1980. Dr. Klam bestowed with the greatest in India ‘Bharata Patna’, He was scientific adviser in defence and in May 11, 1988 conducted nuclear tests adorning a Gorkha hat in the Rajasthan deserts. This small scientist achieved the great dream of India – Nuclear power many years ago had finally achieved it!
Dr. Abdul Kalam had three visions for India
Abdul Klam always worries about India and says that the country is not willing to accept its success even though the nation has great achievements.  In one of his observations he says “I was in Tel Aviv once and I was reading the Israeli newspaper. It was the day after a lot of attacks and bombardments and deaths had taken place. The Hamas had struck. But the front page of the newspaper had the picture of a Jewish gentleman who in five years had transformed his desert land into an orchid and a granary. It was his inspiring picture that everyone woke up to. The awesome details of killings, bombardments,deaths, were inside in the newspaper, buried among other news. In India we only read about death, sickness,terrorism, crime. Why are we so negative?”, he questions.
Another question: Why are we, as a nation so obsessed with Foreign things? we want foreign TVs, we want foreign shirts. We want foreign technology. Why this obsession with everything imported? Do we not realize that self-respect comes with self-reliance? I was in Hyderabad giving this lecture, when a 14-year-old girl asked me for my autograph. I asked her what her goal in life is:She replied: I want to live in a developed India. For her, for you, we will have to build this developed India. You must proclaim ( From Abdul Kalam)