There are handicaps, mentally challenged and disabled persons with wonderful achievements to their credits. When everyday routine is a perennial problem to them they overcome those difficulties, setting high targets to their life and achieving them.
Girish, a permanent disable from India plays badminton which is an impossible task for a person with only one leg.  Girish lost his leg in a train accident at the age of 2. He had many records to his credit under the disable categories. He played Paralympics Asia Cup for disabled, held in India and won a gold cup. He played in Israel and Thailand and other countries representing India. He also ride bike like any other ordinary man.
He trains himself six hours a day and moves around the shuttle court since he can not stand a long time on one leg. In spite of no monetary support what so ever from the government or no private sponsors to his game, he is passionate for his game and pursue it with all odds.  What makes his story so unique is his determination. With  only one leg and no help from any source, he achieved great records in Indian Badminton. How many of us can withstand such a situation?

Sharma was born in Rajkot to an Indian Railway Employee and transferred to Gujarat with his parents. He lost his leg in a train accident at the age of 2, between rails and amputated. With his victorious achievements in badminton he never felt as an extra burden to his parents. He was among 1000 contestants from many countries for the badminton choice and got selected. This selection grows confidence in him that he is not alone and he had the required driving power in him. His won many matches both singles and doubles and he is all around the court while playing. 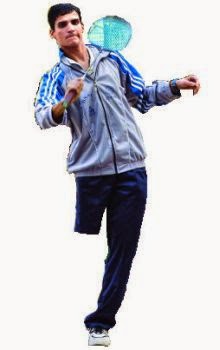 He had a sad story to narrate about his decision to go for badminton as a handicap. Reports say that he loved a female and she insulted him with harsh comments on his disability. This triggered the inner powers in him, a burning want to prove that he is not a handicap and like another normal man can take hard sport and win. He chose badminton as his life career because badminton is a tough game and requires a lot of sills and energy. His decision paid him dividends.
His mentor and guide Mr.Wad proudly says that Girish is a great player. With one leg he moves around the ground like any normal person with energy and commitment. He plays on the ground not non stop for more than half an hour. You have to only see him playing to believe it. He is definitely a crown to Indian cap that has tutored Sharma for the last four years, agrees. “You have to see him play to believe it. He runs around the court like any normal player and will not give up.
This is a true inspiring story to lazy youngsters. With all body functions normal many youth are getting addicted to bad habits and loosing their stamina, strength and energies. If a percentage of our young Indians population explore their energies for the welfare of the India, we will always see a victorious India. All god medals in Olympics, Asian games will be ours. Government of India should populate such inspiring stories as a part of the commitment through all possible channels. If these stories can reach millions at least hundreds will be motivated.  If they read his story they will get motivated and their life will take new turn.