Sachin Tendulkar – International Hero from the Age of 19

Sachin started his career as a cricketer as early as 16 and won international acclaim in his match at Lords from the Cricket Genius Don Bradman. A gifted batsman, with meticulous calculation on the pitch,
shook the records of his seniors like bran Lara and Bradman.  Sachin lived in every sport lover’s heart
around the world as ‘Little Master’. 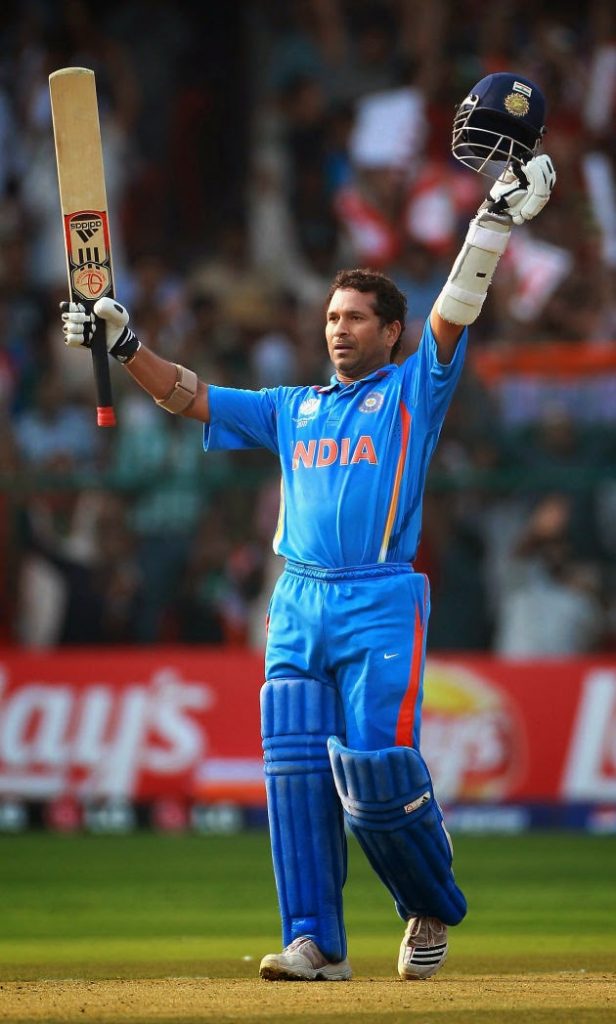 Sachin Ramesh Tendulkar was born in Mumbai in the year 1973, and is popularly called by cricket fans as ‘little master, cricket genius and God of cricket’. He had many titles under his sleeve ny great cricket players. Brain Lara calls him the greatest cricketer of all times, Don Bradman calls him as his replica. Tendulkar started his cricket career at the age of 11 and continued as an unmatched player for twenty-four years. He record list is very high and few
of them is not over written by any other cricketer so far.
Partial list of Tendulkar’s Cricket Record:
Test Cricket: Matches 200 / Runs 15931 / Highest Score 248 against Bangladesh / 51 hundreds/ 69 sixes / 115 caches (Batting and Fielding)
DDI: Matches 463 / Runs 18426 / Highest Score 200 against South Africa / 49 hundreds / 195 sixes / 140 caches (Batting and Fielding)
No great records at IPL/ T 20 and CL

Among other credits to his cap is

What Makes Sachin a Complete Player?

Sachin is an all-rounder. While playing cricket, he is totally absorbed in the game. He played cricket with the same perfection as a batsman, bowler and fielder. After Sir Viv Richards, sports people love Sachin batting. While fielding, he is all over the field, putting all his efforts in the match. He neither worries about his fellow players nor about the public while in field. His whole concentration was towards his game. He is biggest cricket icon of his times. He is highly principled and balanced. He strikes with perfection, waits for the opportunity and never makes a wrong move while at strike. He knows the temperament of the bowlers and plays any kind of bowler with ease. His anticipation of the ball and it’s placement in line with his judgement. He is a great player both in orthodox shots, back foot and front foot punch and modern stokes. He always has a composed temper and calm player.
One of Sachin’s best performances is against Australia, the best cricket team of Sachin’s time. He was just 19 when he played on the lightning fast pitch at Australia.
Sachin Tendulkar bagged many awards to his talent including Bharat Ratna, (2014) the highest country award and first time to a player.  Other awards include Padma Vibhushan (2008), Padma Shri (1999), Rajiv Gandhi Khel Ratna (1997), Sir Garfield Sobers trophy (2010), Arjuna Award (1994), Wisden India Outstanding Achievement Award (2012) and many more.
For a couple of times he took up captaincy of Indian cricket team. He was not quite composed with that glory and decided to remain as a good player than a captain.  He is a natural leader and guide to his team mates and future cricket players with his actions on the field than preaching the principles of cricket. He is a non controversial cricket player throughout his career and never had any negative remarks. He is a genius in cricket and his name will be house hold for centuries to come. Who else will be an inspiration than Sachin to millions of young players in the world?
References: http://sports.ndtv.com/cricket/players/14-sachin-tendulkar-playerprofile
http://www.espncricinfo.com/india/content/player/35320.html#profile
http://en.wikipedia.org/wiki/Sachin_Tendulkar