A great deal of hard work goes into making an animated film. It requires imagination, discipline and effort. We have hundreds of great animation films from Hollywood and from many other countries.The most famous of those films are Mickey Mouse and Donald Duck, the first ever breakthroughs in animation world.. Other great movies like Lion King, Jungle Book are among others which had a great appreciation among masses. Indian animation films that are popular today is little Krishna, little Bhima, Hanuman among many others.
A movie ‘Bala Ramayanam’ , with all child artists fascinated  me. This is an Indian film. There are no elderly or experienced artists in that movie.The choice of the subject is from a great Epic ‘Ramayana’. It is an Indian mythological story which stand for human values and traditions.  The director of the film is M. S. Reddy and he is popularly known as ‘Mallemala’.  With around 1000 children shooting an epic and making it popular is an uphill task. It is very difficult to control children at young age and imagine how the producer would have controlled so many children for so many days to make the film a grand success. This children film gave a respectful entry to Junior N T Ramam Rao’ the grand son of  Indian ‘Lord Krishna”, senior N T RamamRao and won  a national award for ‘best Telugu children film’  National Film Award for Best Children’s Film, Nandi Award for Best Children’s Film, Nandi Award for Best Lyricist.
Watch the full movie here
Making an animation movie is a tough task to the film crew. You have to draw the animated pictures, prepare a screenplay, give the animated pictures a 3 D effect, make dubbing artist to make voice to the character and sink the voice with the animated characters. Make the film a realistic to the audience. 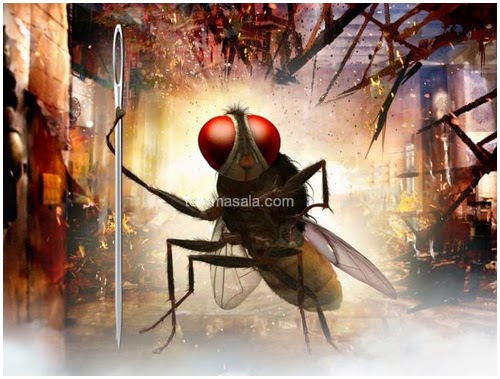 A brilliant imaginative skill is an animated film which makes mouse talk, a fly dance and sing.  A recent movie ‘ Egga” (meaning the fly), in Telugu by an icon director Rajamouli created ripples in the film industry where he made a beautiful looking tiny fly talk, dance and do wonders. The heights of imagination in that movie is scripting and making the fly sing a full length song.  Such movies are ever green because the audience will be from all walks of life, young and old. This film had inspired many of the Indian film makers and the inspiration to the director is none other than Mickey Mouse. Animated films should have perfection in all film sections like handing camera, its angles, the texture and composition of animated pictures, in depth knowledge on computer animation and 3 D effects that can transform the imagination into reality. Sky is the limit for animators, and they travel into the virtual world to bring unexpected as expected, skies to reality.

In Walt Disney’s words, “It all started with a mouse,” it certainly didn’t end there. The characters in Disney’s creation represent characters in our live with all emotions and facts and no company or person so far had an impact on human race as Disney had. Animation films had such an impact in human race that at least 70% of the children behave like those character in the animated films. Animation Filming requires a blend of scientific and artistic attitude and  balance of brain cells.  A fully grown genius can only become an animated film maker. For those who choose film career, training in animation is a must and essential. Few great creating on animation is a real inspiration to
aspirants.
Ref: http://www.bloopanimation.com/how-to-make-an-animated-movie/
http://en.wikipedia.org/wiki/M._S._Reddy