An Inspiration Story Of Walt Disney

I am not joking. A failure sometimes creates a burning want to succeed and that inspiration takes us to the top of the world.Those great people who learn lessons from failures are living legends and set remarkable example for young people to the present generations who get despaired for small instances and choose a wrong path of life. Failures normally lead us to desperation and suicidal tendency if not checked in time. Only few will overcome the desperate situation and will be be inspired in the positive direction and become global icons. One such example Walt Disney, the founder of Walt Disney Company and his studios are world-famous Walt Disney studios in Hollywood, America. 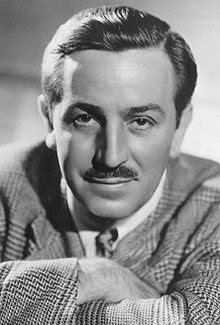 Walt Disney started of as a news reporter and the boss fired him out of job to streets for lack of imagination and good ideas. His subsequent failures in business landed him in bankruptcy and failure. The most admired Mickey Mouse cartoon was first rejected by MGM in 1927 and the reason quoted is that ‘a giant mouse on the screen would terrify women’ Ref: (1). Walt Disney is one among the five children to his Irish-Canadian and German-American parents. He was born on December 5, 1901. He was very unhappy at home in the early days because of his father’s selfish attitude. Later on when he became the proud owner of Disney Land he commented that Disneyland was his wish to see that parents and children visit together for entertainment and he maintained the same support to the parents till his death.
He created a cartoon character Mickey Mouse when his artists left him abandoned and turned to the side of the distributor including his chief animator artist Ub Iwerks. 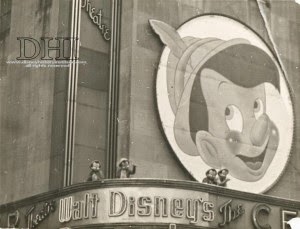 One of his publicity stunts for the première of Pinocchio back fired.  For this première show he chooses 11 midget’s to act as little puppets. He supplied them food and wine for the day and asked them to stay at the top of the Radio City Music Hall in New York. He wanted to attract the children from audience with a welcome ‘Hello’ from these midget. But the intoxicated midgets created havoc by becoming nude and taking obscene words to the crowd below and embarrassed the police with this ugly situation and took heavy time to bring them down and take them away from the scene.
Hi  long-time producer and associate Mintz cheated for a film Oswald the Lucky Rabbit.  Walt created the film, when he was 26 yeas. In a year’s time the picture the picture became popular and his cartoons caught on name and fame, Walt came from  California to New York for renewal of the film with his producer Mintz, to negotiate both the increase the share from 20%. The adverse reply by his producer Mintz who denied a larger cut and adding fury to the fire he said that he had already negotiated employment agreements with all of Walt’s animation crew, meaning that Charles no longer needed Walt. He’d continue the Oswald series without him. Charles Mintz might have thought that Walt will settle for 20% cut but surprisingly Walt left all rights of his baby Oswald the Lucky Rabbit to Mintz. By then Walt is known for his success in Oswald the Lucky Rabbit. But for Walt this failure would have broken the nerves of other people to a point of no return or devised a plot to take revenge. By keeping calm Walt Disney created the most acclaimed cartoon movie ‘Mikey Mouse’.
Walt Disney did not get dejected from failures. Instead his confidence grew up and he started learning from all the setbacks a new lesson. He prepared himself for bigger risks and in all those critical situations used his wisdom and knowledge and rose to a star place in the Hollywood kingdom. He is a true inspiration to everyone by all standards
Ref:

Will Disability Come in the Way of Success? Stephen Hawking